Here is what I’ve been up to – Bob Steele 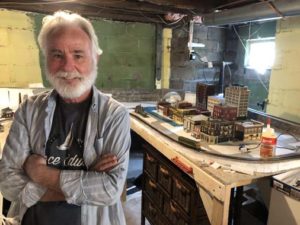 Many knew Bob as the host of the afternoon radio show ‘Afternoon Drive’. What many may not know is that he had a long career as a touring musician/composer before joining the CBC in 1987. He played in several groups and toured throughout Ontario and Mid-West USA. After retiring from the CBC there was another interest that he previously had and recently has reverted back to it. HO-Trains.

I built my first HO scale layout – 4 x 8 – back in the 1990’s thinking it would be something my son and I could do together, but he soon lost interest. When I retired, I thought I’d build another one but this time much larger. What I like about it is the creativity, detailing one or more areas, then, after deciding it doesn’t look right, having the freedom to tear it down and start over which I have done several times. It truly is a never-ending project.