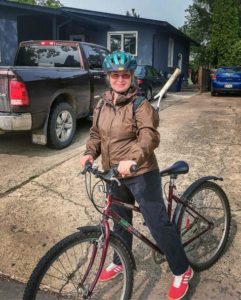 I have been a year-round recreational tennis player for roughly a quarter-century, playing two or three times a week – indoors in winter, outdoors in summer. So, when COVID-19 forced the courts to close it left a gaping hole in my life. I was sad but understood the necessity in order to curb the spread of the disease.

As the snow disappeared, and the count of infections went down, I eagerly looked forward to the day the padlocks would come off the gates to the outdoor public courts across Saskatoon. At the same time, I knew everyone would have to follow new protocols to keep from passing around the virus. These protocols are posted on the websites of tennis associations around the country, as well as on signage at entrances to the public courts.

I won’t cite all of the protocols, but I will mention a couple of key ones: maintain physical distance including while coming on and off the courts; and only touch your own equipment (this is not instead of sanitizing your hands, but in addition to). It means that each player is to serve his or her own balls, marked for identification, and balls are to be returned using racquets or feet only. (There is a very easy manoeuvre to return a ball that has rolled to a stop, using only a foot and a racquet to lift it into the air then bat it over the top of the net.)

Alas, just as in wider society not everyone takes COVID-19 with the same degree of seriousness or is equally informed or willing to follow anti-transmission protocols, so it is too among tennis
players.

Some people just didn’t bother to read the signs or check how to play safely. Others repeatedly forgot, well into the season, not to pick up another player’s ball with their hands, or not to walk right
up beside someone to speak. Others bluntly declared they didn’t care about COVID-19 and weren’t willing to follow public health measures.

I found the situation too exasperating. Going out to play tennis wasn’t relieving my stress, it was adding to it. So, I put my tennis racquet aside and instead rode my bike for exercise.  It opened up a whole new experience for me. I discovered the impressive network of parks, trails and natural areas snaking through my end of the city. Every time I went out (almost daily), I took a different route, and in the process, explored the newly built neighbourhoods edging out to the horizon. I saw wildlife – even got close enough to a fox to take a decent photo with my smartphone.

And everywhere, I passed by friendly people who smiled and said hello. I always arrived home in a better mood, feeling more energized.  As I write this the indoor tennis club has reopened, and once again leagues are being organized. Unfortunately, having players only handle their own set of balls is not among the protocols being implemented.  This is a dealbreaker for me, and so I have decided to forego indoor tennis for now.  I will look for other ways to stay fit once the snow flies.  Who knows?  Maybe I’ll become a winter cyclist yet.