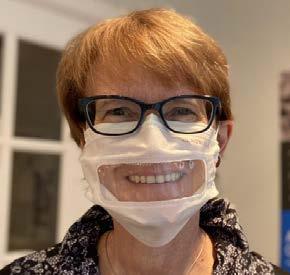 The image of a retired person who has since become crazy busy definitely describes me since September of 2014. My “retirement” began with the organizing of the “CBC I care/Radio-Canada j’y tiens” concert at the NAC. Right after that, I became my mother’s caregiver, which I really enjoyed. At the same time I was volunteering with Audition Québec an organisation devoted to the hard of hearing and the Mathieu-Froment-Savoie palliative care home, all the while having dinners with the “girls”, travels, and camping holidays which have become my passion ( I am living in my camper for 4 months this summer).

Those who know me, know that I gradually became totally deaf throughout my career. I was very happy to receive two cochlear implants (which was the focus of a documentary by Julie Huard called L’Oreille de Jeanne or Jeanne’s Ear). This marvel of modern science has allowed me to hear again. It’s not perfect so I still have to rely on lip reading techniques to compensate.

During the COVID 19 pandemic, many people who are hard of hearing have had a great deal of difficulty reading lips. As president of Audition Québec, I’m particularly proud of having participated in the development of a surgical mask with a window. There is still lots of work to do to make it better known and used, but I’m optimistic!